Welcome to our second and final team for 2019. Our group truly embraces the international nature of Biosphere Expeditions, hailing as they are from Germany, Austria, Switzerland, United Kingdom and the USA.

This phase of the project started on a bright note. As you may know, Horta harbour is adorned with paintings, made by crews of the many ships that pass this way. On our first walk around the harbour, Lisa (one our citizen scientists from the UK) was able to locate a painting created by her late father, which she had not seen before.

With the team in place, briefings, orientations and training completed, we set out to sea on our first afternoon of surveying. This meant breaking new ‘ground’, as we headed for the channel between Pico and São Jorge. Our change in tactic from the first expedition didn’t prove to be as successful as we’d hoped.

After a couple of enforced days on shore, due to weather and sea conditions, we returned to the ocean. After a brief encounter with common dolphins, we were rewarded with whales – sperm whales to be precise. We followed a small group for several hours, getting fluke images of at least four different individuals, including a male.

At the end of the day, whilst following our last whale of the day, we were joined by a couple of whale watching boats from Horta. One was carrying two citizen scientists from our first group – always nice to share the whale experience.

Also on the agenda was the news of the power of our work here or more precisely, the results of photo ID at work. A long range matche of a blue and fin whale from the Azores to Galicia, Spain in 2017 has just been published. This shows how important it is to take these fin and fluke photographs to elucidate the movement of these enigmatic ocean creatures around the seas. 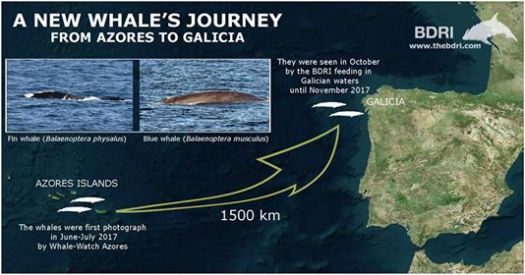