Here’s another example of what funding by many generous donors has achieved on the ground with community staff, whilst expeditions with international citizen scientists were impossible during the coronavirus pandemic:

The coronavirus pandemic has made our expeditions to the Tien Shan mountains of Kyrgyzstan with international citizen scientists impossible in 2020 and 2021. But our community camera-trapping group stayed active throughout, thanks to generous support via our coronavirus community appeal. This video shows some of their successes in capturing snow leopards. Well done and thank you for keeping the Biosphere Expeditions flag flying and research work going! Thank you to Amadeus DeKastle for coordinating it all.

Maxim Koshkin, Askat Mukabaev + three local guides (Azamat, Janat and Shamil) are back from their 645 km camera-trapping trip and this is what they found.

Note that this is just what they found on the ground. The SD cards they brought back still need to be analysed and we will update everyone when we’ve done that.

The approach to the camera traps was conducted using horses, starting from the road running along the Western Karakol river. During the 3-4 hour ascent they observed two small groups of ibex (12 +13) moving west, including at least four male ibex. They also saw two bearded vultures, one Himalayan griffon vulture, two long-legged buzzards, one golden eagle, four ravens and one common snipe over the two days they spent in the area.

They found no signs of snow leopard activity.

Here the team found possible snow leopard sign of activity at two of the three locations they visited (two scats and a scrape) and performed camera trap maintenance.

The team installed two camera traps at new locations along a major ridge line and possible snow leopard movement corridor, finding possible signs of activity, including a track and an old scat.

This site may be visited by snow leopards during a hunt as it is frequented by ibex according to local information. The team performed an SD card / battery swap, but found no sign of snow leopard activity.

We’ll be back with information about what’s on the SD cards and the 2019/2020 report with the results of last year’s long citizen science expedition and the results of this year’s short community expedition will be out soon too. Watch this space.

Thank you to our community camera trappers and the Ilbirs Foundation for organising the community expedition and to our donors for making it possible.

The community team have recovered and the coronavirus numbers in Kyrgyzstan have gone down as the country seems to be on a different curve to Europe, for example.

So the team are heading into the mountains today from Bishkek to work with the community camera trappers, retrieve camera trap SD cards, service the camera traps and engage with the local community in the absence of a citizen science expedition this year.

They’ll be on horseback to speed things up. Watch this space for updates. 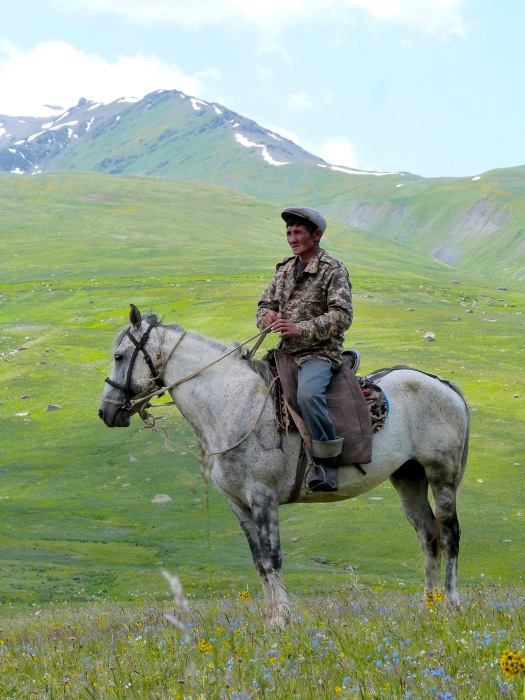 Our plans have been thrown into disarray once again by the coronavirus.

We thought Kyrgyzstan was doing well and keeping the virus in check, but as it turns out we are only just at the beginning of the country’s first wave.

We have also just found out that all of our Community Camera Trap Monitoring Group (CCTMG) members are sick with COVID-19 symptoms. They are all from the village closest to our expedition base camp and from what I’ve heard, nearly every household in that village has at least one sick person in it.

So in the interest of all, we have postponed the community expedition. We will keep assessing the situation and keep you updated on here.

Some good news though is that recently in June, before they got sick, the CCTMG team was able to go into the mountains, do some more survey work and collect another SD card from a camera trap in our study area.

On this camera were more grainy night images of a single snow leopard, as well as some ibex and other species.

This is great news amidst the pandemic. Let’s hope that our people and the country can recover to a point where we can get back up into the mountains.

Usually by this time of the summer we’re already getting started with our  expedition here in the Tien Shan mountains of Kyrgyzstan. In fact, mid-June is my favourite time to be up in our study area as the wildflowers are in full bloom and the mountains are at their most beautiful. More importantly for our research though, the number of shepherds is minimal, which increases the potential of seeing our study animals. This year though is obviously very different. It is increasingly challenging to create plans too far in the future, and as such, we were not sure that the lockdown in Kyrgyzstan would be lifted by this time of the summer. So instead, our community expedition will be taking place at the end of July for a total of eight days with the main goal of camera trapping and extending our community-based conservation work. Without our international citizen scientists, there  won’t be much time for us to do the normal surveys that are a big part of the project year after year.

Both the people and the data they collect will be sorely missed! It makes you realise the importance of people from around the world coming to join us each year, working hard towards the goal of snow leopard conservation. It will be a very different expedition without them.

We’ve gone through all the community camera trapping team pictures now and we have some very interesting results:

As well as young ibex playfighting

And most interestingly and excitingly of all, a young ibex being stalked/hunted by a snow leopard

The coronavirus has forced us to make major changes to our efforts here with the Tien Shan snow leopard expedition. All citizen science elements of the expedition have been deferred to 2021, but we are still able to push ahead with a community expedition this summer, thanks to the generosity of those who have contributed to the Biosphere Expeditions appeal. We are lucky in getting our community expedition funded through this. There are other projects out there that are not fully funded yet, so please, if you can, consider supporting those too. Anyway, thank you to all donors who have funded us!

Right now we are in the planning phase of how to pull all the different partners together here in Kyrgyzstan. As always, we have our inaugural partner NABU on board with their Grupa Bars (anti-poaching patrol) staff.  Also joinung us this year will be  Askat Mukabaev, who is a full-time conservation biologist at ILBIRS, another local conservation NGO here in Kyrgyzstan. Beyond that we have our community camera trap monitoring group that will be joining us as well. The expedition leader this year will be me, Amadeus DeKastle, as I’m already here in Kyrgyzstan, having lived here for a good while!

This year will be very different from previous expeditions, but at the same time, I know we are all looking forward to continuing this project and collecting another valuable data set this summer. Our community camera trap monitoring group has already collected some of the camera traps that are accessible and which have been out in the field since the end of the 2019 expedition. And we have a new image of a snow leopard in a new valley! It’s at night and blurry, but it’s definitely a snow leopard. Well done community camera trappers!

So the excitement is there to check the camera traps that are still in the field, and also to use our community expedition really to develop the community-based conservation element of our work.

We are looking forward to the expedition (and will keep you updated via this blog). For next summer, I hope that things will be back to full capacity so that we are able to experience an expedition together again.