The team that went to the original base camp valley had hoped to make camp in the general vicinity of the attack on the horse. When Rhys looked around his possition, he actually found a leg and then another a bit further away a third was found. 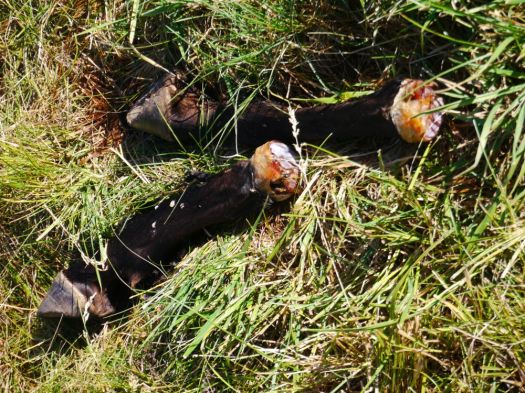 They had the spot and spent two days surveying out from there into any likely habitat they could reach. Unfortunately to no avail as far as the leopard was concerned. They were compensated, however, by the occurance of another major herders’ games event. During the last slot we were informed of an “annual” Herders’ Olympics downvalley from us. Well it seems that “annual” means fortnightly in these parts and so the team were met with huge crowds and even a media presence from Bishkek there to cover the games.

The other team returned to the valley in which I had heard a the coughing sound and conducted a couple of days of hard survey, but again did not find any evidence of our animal. They did remark on the beuty of the place though and were accompanied by Talant our very helpful neighbour and some of his horses to carry gear and due to his seniority within that particular group, Meinhard got a horse to ride along with Talant and Kurmanbek (spelled correctly this time), one of our NABU participants.

One Reply to “From our snow leopard volunteering expedition in the Tien Shan mountains of Kyrgyzstan (http://www.biosphere-expeditions.org/tienshan)”