On Monday we welcomed our first group of expeditioners arriving from across three continents to volunteer with whales and dolphins. A dynamic group with a lot of women power, complemented by one brave man with a great sense of humour.

The first day and a half of training was intense. Our marine conservation volunteers received introductions to the cetacean species, the equipment, the different sets of datasheets and lots more. This year, we are also trying out the new Monicet app of the Azores University for cetacean monitoring.

Not surprisingly, our risk assessment has been fine tuned to include a strict covid protocol and I am happy to confirm that after three consecutive days of self-testing and wearing FFP2 masks, we have no positive cases in the group and no symptoms. It was nice to discover people’s smiles behind the masks.

During our first afternoon out at sea we were treated to five sightings of common dolphins, adding up to a total of 100 individuals. The animals joined us for a while, bowriding alongside the catamaran, affording great views and the chance to test our newly acquired dolphin volunteering and data gathering skills. Also, the team seems to have good sea legs, which is clearly an advantage.

On day 2, we had good weather and calm seas and no fewer than four cetacean species. The morning started off with a sighting of a minke whale, which is a rare treat, as this species is not often observed here. After this four groups of common dolphins kept us company. In the afternoon, three Cuvier’s beaked whales surfaced not far from the boat. This was a very special observation as it is only the second time since 2004 that this species has been recorded by the Biosphere Expeditions whale volunteers.

When we were cruising in deeper waters, the hydrophone was lowered into the water and we were treated to some “live audio” from a group of sperm whales. We were determined to find them, but they were playing hard to get and just as we decided to head back, we spotted their typical blow in the distance. The day ended perfectly by the lift of a sperm whale’s fluke diving to greater depths. As the sun was setting, we headed back to Horta, tired but satisfied.

After an exceptionally long day out at sea of sailing 144 kilometres for nine hours, the team enjoyed a nice hot meal prepared by our host Claudia.

The weather is looking rough for the next two days, so today we will go on a hike along Faial’s caldeira combined with a visit to Capelinhos and on Friday we switch to photo-identification training. There is plenty more to learn, study and analyse.. 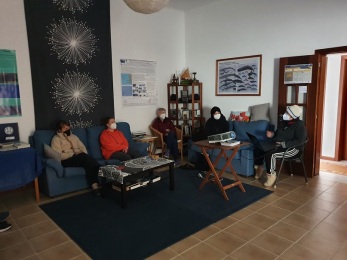 Briefing in the garden 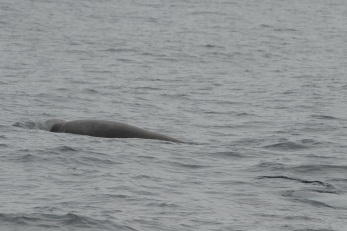 One Reply to “Azores: Group 1 off to a good start”