Friday was one of those days you won’t forget for some time!

The morning started off quite drizzly and wet, so we delayed the departure. I was invited by Rui and Monica from the University of the Azores, IMAR, to join them aboard the boat I had been going out in.

The lookouts hadn’t seen anything and the south of Faial lookout had actually re-located to the north of the island. We headed out to the south-west. Monica and Rui wanted to find a fin whale to attach a short-term tag to, which records any vocalisations and also data during a dive, such as orientation and acceleration. 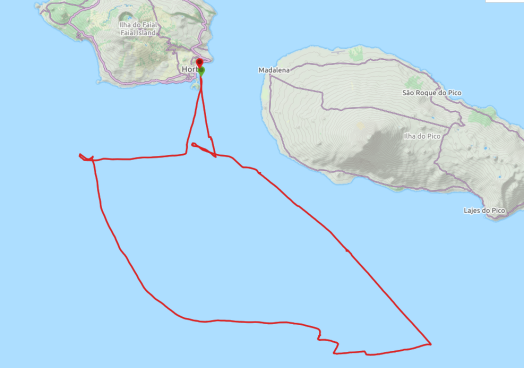 We had been going for about an hour when a back of a whale was spotted in the swell. We stopped and waited and waited a bit more. Blow! It turned out to be a sperm whale. Not what we were looking for, but we went to get the ID. As it fluked, I was pretty sure that I recognised it. We didn’t wait for any more, instead heading now to the south of Pico where the weather was clearing. We found a small group of common dolphin that came over to the boat and some a little further out appeared to be feeding.

We decided to head a bit further to the southeast, but by 13:30, we hadn’t found anything and started to head back to the harbour.

As we approached Faial, the lookout spotted the sperm whales again, so we headed over to have a look. Another project the university has, is to use a drone to collect samples of the blows, the famous “Snot Bot”! Although in Portugal (and therefore the Azores), drones are not allowed to be used by the general public, the use of this one (as wel as it biopsy darts and application of a tag) is approved under a research license. As Rui and Monica prepared the drone, we followed a whale along the surface. As it dived, I gave an excited shout! This group was the “Winter Whales”, so named, because we have seen them once in December, 2007. Once this encounter was over, we went back to Faial and everyone went their separate ways, but about 30 minutes later, the lookout Anteiro called to say he had seen a mother and baby blue whale! So we all raced back to the boat and off we went again!

The whales were off the South of Faial heading to the west. Monica & Rui prepared the tag and the biopsy dart (to collect a sample of the skin/blubber for analysis). Unfortunately, the mother was not very cooperative and every time we got almost close enough to deploy the tag, she turned away. After a couple of unsuccessful attempts, it was decided to leave the pair to continue on their way. We did get the photo ID shots from both sides for both individuals and they have been sent off for matching.

The calf did some absolutely incredible lunges/breaches while we were watching that made for some unbelievable sights. I don’t think I will forget that for a very long time!

We will be out again next week.