Update from our conservation holiday protecting leatherback and other sea turtles on the Caribbean coast of Costa Rica www.biosphere-expeditions.org/costarica

Wednesday morning Fabian had exciting news for us all. During the night a natural nest on the beach had hatched and that afternoon we were to excavate the nest to see if there were any stragglers left behind and what percentage of the eggs had not hatched.

When we started digging up the nest, we found five hatchlings that were still alive! They had been trapped in the nest unable to make their way out. Under normal conditions they would have died before making it to adulthood, as do about one in a thousand of them, including some hatchlings nearby that were trapped under a log. But now they had been given a second chance at life.

Inside the nest were also 52 eggs that had not hatched, all at various stages of development. Normally, an average of approximately 20% of eggs do not hatch. This can be due to fungal or bacterial infection, genetics or environmental causes. Out of the 52 eggs not hatched in this nest 25 were infected by a fungus.

Hatchling success rate in this nest was very low with only fifteen emerging, and out of those seven had died in the sun. Once Fabian had checked all the eggs and buried them in the sand it was time to see the five survivors to sea. We released them at the high tide mark and watched them make their way towards the waves. As they all disappeared into the sea, expeditioner Sherry  called them “amazing fighters”.

The excitement didn’t end there. On Thursday we were told that another nest, which had been relocated from its original nest to a secret spot on the beach before the hatchery was built, had hatched. So we went to dig up the nest to study survival rates, but when we did, we found a full clutch of still viable, but unhatched eggs! As we had already disturbed the nest, we could not rebury them as this would significantly decrease chances of survival. Instead we reverted to the accepted alternative method and placed the eggs in a cooler box and covered them with moist sand. They now live next to the kitchen, and we are all anxious for them to hatch. 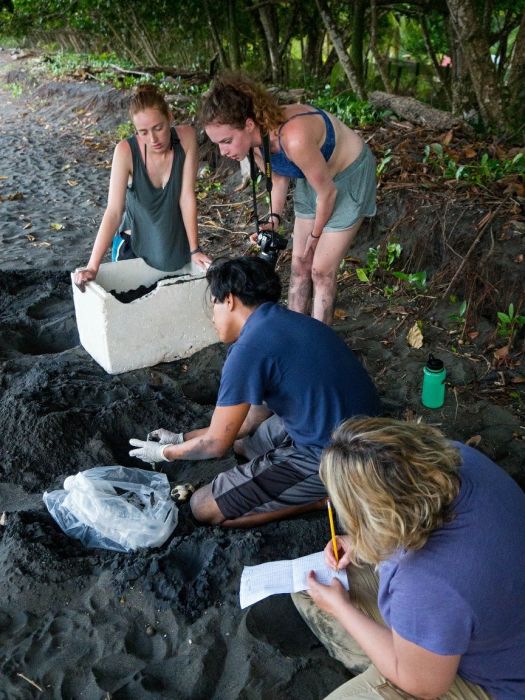