We’ve walked many more kilometres on the sand and dunes over the last two days with all teams determined to complete their surveys. By Friday afternoon we had surveyed 39 out of a total of 42 cells, making the scientist very happy. Heavy wind and downpours stopped us from surveying on Wednesday afternoon. Fortunately all tents were still in place when we returned to base.

The week was over too soon. Before we went out to a special event on the last evening, Steve summed up the results after six days of working in the field. Not including Friday’s results, 399 oryx were counted at feeding spots, 126 mountain and 49 sand gazelles were encountered as well as two hares. The new method of visiting two predefined observation points in each cell to survey the area for 15 minutes will definitely result in more accurate/comparable results. We caught only three rodents during the week using 16 traps, leading to the conclusion that the number of rodents is down. This could influence the number of desert eagle owl – a bird target species that was not recorded on the surveys – but also on the cat population. 130 fox dens were observed and quite a few new dens were recorded. All of this will go into the expedition report.

We left camp after the obligatory team picture session to go out for a night dune drive. Sponsored by Platinum Heritage the team was invited to spend the evening at traditional Arabian dune camp. We learnt about Arabic coffee, cuisine, dance, henna painting, smoking shisa, etc. The dinner was delicious! It was far beyond our usual bed time (22:00 ;)) when we were dopped back off at base. Still everyone had enough sleep since we decided to have breakfast late today, our last day.

Thank you so much, again for joining this project, putting sweat, time and money into research & conservation. I hope you’ve enjoyed the week as much as David, Steve and I did and I hope to see you again sometime somewhere. 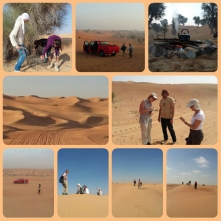