The big wedding was a big event and we were honoured to be invited (and photographed a lot as objects of curiosity, especially tall and blue-eyed Will).

Another big topic of discussion was the sighting of a crocodile in the river close to the village. This caused quite a stir and many were quite scared of the beast coming into the village. Never in the recent past has a crocodile been seen in this region, so the fuss is more than understandable.

Unfortunately our team 2 could not match this with any spectacular findings of its own. There were encounters with aggressive wasps, large spiders, a pit viper and – and a very unexpected and interesting interview with loggers! Still, even these small pieces of the puzzle will be a useful addition to the whole picture we are gathering up here. Science often proceeds and progresses in leaps and bounds, so this group was a small step, but a step nonetheless. 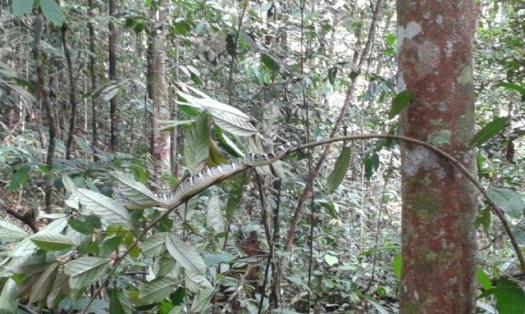 Another step and a highlight was our visit of the school in Kota Lama. After a short traditional welcome dance, we all joined a classroom to follow Febri’s lesson and slideshow about the local environment in general and about tigers in particular. About 40 children, unifromed and up to 14 years of age, paid even more attention as a quiz opened the opportunity to win a prize. There was much excitement as Inge told a story about the important role of each individual in a larger group whilst showing a magic trick (she once was a professional magician). There was more amusement and cultural exchange as Andy showed them the funny southern Californian “Hasta Pronto” (see you soon) handshake.

Yes, two weeks have gone in a flash and I would like to thank everybody for all the diverse input you have contributed. It would be great to see you staying involved.

From our Sumatran tiger conservation volunteering holiday with tigers in Sumatra, Indonesia