On Wednesday, a beautiful day of surveying, punctuated by two minke whale sightings, the first was at 09:00 on our way to our first survey site. They were far from our boat, so we grabbed masks and snorkels and hopped into the speedboat for a closer look. We followed them at a safe distance for about half an hour watching them blow and dive until they disappeared into the deep.

The surveys were both at Osprey Point, and by the afternoon the swell was so strong that Jean-Luc was given the nickname of Sultan of Swing in reference to the laying of the transect line. The substrate team, Catherine and Nadege, had an equally difficult time reeling it in, but although the team were bashed and tumbled by the waves, the stories were well recounted later!

The surveys on Thursday clarified our hypothesis that the further into the MPA we go, the less coral cover there was due to the environmental conditions, increased siltation, and restricted water movement. Nasser, Kristoffer and Hari went out on the speedboat and documented illegal fishing practices in the area, whilst the rest of the team entered data. The restricted water movement did, however, have a bonus feature in that huge amounts of phosphorescent phytoplankton congregated in Khor Nadj, our overnight mooring area, and with thousands of fish coming in to feed after the moon had set, we were treated to an amazing phosphorescent fish display. It was so beautiful that some of the team were tempted to join in, so donning masks and fins added to the incredible light show – a once in a lifetime experience! 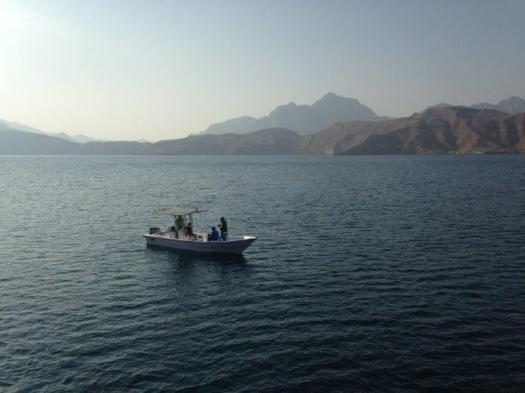 Sailing into the remnants of a storm, the sky was hazy and the sea lumpy as we reached our first survey site of Friday, Paradise Point. The coral, though, was good, and the fish life abundant. The afternoon site, named Son of Gargoyle was even better, with ancient porites mounds and prolific grouper. The survey of the MPA was over (for this year at least) and we steamed round the northern tip of the peninsula accompanied by two Indian ocean humpback dolphins, who bow rode with us for a while. 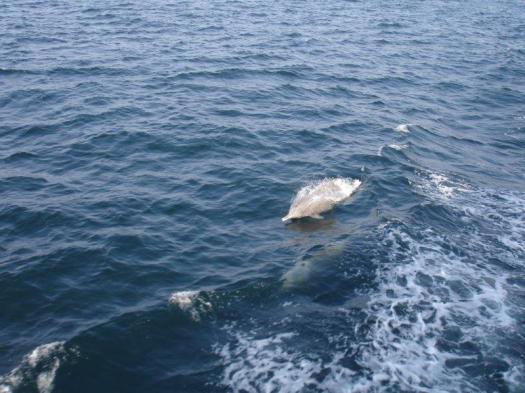 Back in Khumsar, as the Mosques called to prayer, we decided to set foot on dry land and visit the village nestled in the rocks with no road in or out, accessible only by boat. It was a great excursion, and gave a little insight into the lives of the local people here – a community reliant on the sea. 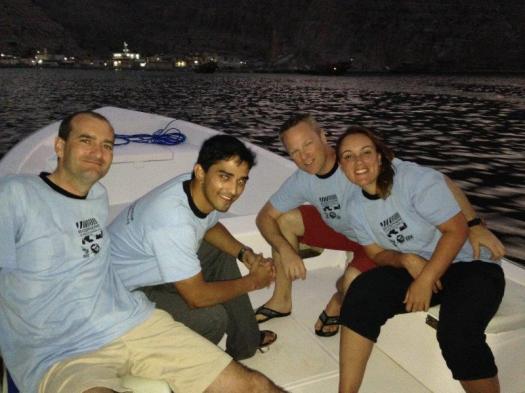 We were woken today, Saturday, at 04:00 by the waves slapping the side of the boat. Nadege, worried for her diving gear, went up on deck and rescued wetsuits and bikinis from being blown overboard. Dawn yoga was a windy affair, and breakfast was tricky with tea literally being blown out of the cups, but we made it back to Khasab, even managing to stop for a dive at Pipi Beach along the way before leaving our trusty survey vessel, the MS Sindbad, after lunch.

Another expedition over, but thank you for a wonderful week, rich in laughter and learning, new experiences and great memories – no one who saw will ever forget the sight of a terrified Hari trying to escape from an innocent turtle! We look forward to Jean-Luc’s report and are grateful for everyone’s involvement. It will be great to see how our understanding of the MPA has developed by this time next year.

Thank you to everyone who supported this project. Special thanks to the Oman Ministry of Tourism for supporting our efforts to conserve coral reefs through tourism.

Update from our SCUBA diving volunteer opportunity & conservation holiday on the coral reefs of the Musandam peninsula, Oman.