Team 4 has arrived at Okambara, and they were evidently briefed about my unusual tactics to get team members to be on time because they are always early!

Team 4 has been very keen to get to work, and so eager for the briefings that we finished them in record time. (I admit to using coffee and cake as an incentive to stay caffeinated and sugarated.) Even before their first day in the field all three activity groups jumped into organising their kit and the first morning was ready to leave base camp a full half hour before we were scheduled to start.

We were well rewarded for everyone’s efforts because this group’s very first box trap team captured a honey badger (in the trap at the lodge) and a porcupine (at Bergposten). The IZW (Institute for Zoo and Wildlife Research, one of our partners here in Namibia) wanted to immobilise the honey badger and take some DNA samples, and they invited the Biosphere Expeditions team to be involved in the process. (You’ll remember that the last group also captured a honey badger and while the IZW was keen to take samples then as well, unfortunately for our last group all the IZW scientists were in the field and we therefore released the animal without immobilisation.)

While I am sure the honey badger doesn’t think he was any too lucky, we think he was because the IZW veterinarian identified a foreign object imbedded in his leg. After a small bit of field surgery she extracted a large, broken piece of porcupine quill from his hind leg. You can see the piece being extracted in the photograph above. We all got to watch the honey badger’s quick run for freedom about three minutes after the immobilisation antidote was administered. Afterwards the IZW team cleaned up the field station while two Biosphere teams went to work at re-setting the box trap. Thanks Team 4 for working your first day until dark!

Team 4’s first tracks & scats team found three hyaena tracks and one leopard track on track #4, and we had a good laugh at the evening briefing when they were disappointed to find so few tracks. We assured them that finding four tracks in a two and a half hour walk is an enormous success. We also found hyaena tracks in front of the Frankposten trap as we approached it for our box trap training, so the whole team received a lesson on measuring and identifying tracks our first day out. 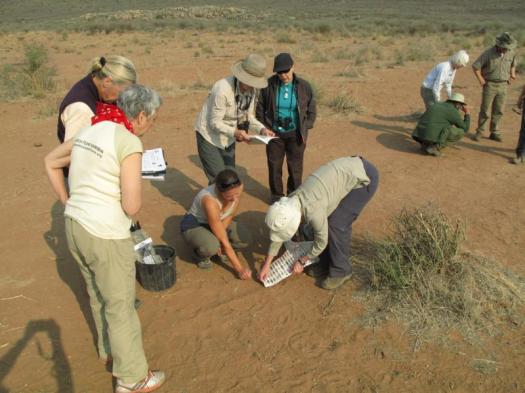 The first day’s elephant team was only successful in learning how to use the telemetry equipment and also learning how easily a herd of nine elephants can disappear into the bush. The afternoon team looked and looked as well, and eventually found them through hearing their very loud crushing of and foraging on the brittle acacia shrubs.

Team 4’s other odd reward was a giant thunderstorm and believe it or not, RAIN! Unbelievable as it sounds, rain came in the middle of the night for several hours. This is most welcome because there has not been any rainfall here since May, and the bush is quite dry. We’ve been worried for the animals with Namibia’s drought, and hopefully the 10 mm of rain that fell last night will give the shrubs and grasses the boost they need to feed the game animals. For those of you that have been here and seen how dry it is, you’ll know how shocking – and welcome – the rain is.

2 Replies to “Update from our working holiday volunteering with leopards, elephants and cheetahs in Namibia, Africa (http://www.biosphere-expeditions.org/namibia).”