END_OF_DOCUMENT_TOKEN_TO_BE_REPLACED

Hello to the expedition team members and other interested parties and welcome to the first diary entry for the 2013 Malaysia Reef Check expedition. My name is Paul o’Dowd and I am the expedition leader for this coming Malaysian reef conservation project. Currently I’m in Australia, at home in North Quensland, where I’m getting my stuff together for my looming departure in a week or so, about a week ahead of team 1.

I’m looking forward to getting back to Tioman Island and to meeting and working with you over the coming month. Last year, the expedition went very well and I hope this will be true for this year too.

Reef Check is a powerful method of monitoring the health of the world’s reefs. The process of learning the Reef Check methodologies opens up the world of marine science to those who want to go deeper in their relationship with the sea. So bring your curiosity and your desire to make a difference to the world (and make sure you are swatting up of Reef Check as instructed).

While we’re talking about things to bring and do, make sure your entire set of documents are in order and ready to hand to me at the briefing on the first day. These include your checklist, dive qualifications, medical information and insurance forms. Be aware that we will be spending much of our time on a boat, which is comfortable, but ultimately limited in storage space. You will be asked to bring aboard only that which is needed for that week on the sea. A limited amount of your stuff can be stored at the dive shop but it’s not a large allowance. Please make sure you pack with these limitations in mind.

END_OF_DOCUMENT_TOKEN_TO_BE_REPLACED

The third and final slot of the Biosphere Expeditions Malaysian Reef Check expedition has drawn to an exciting close this morning. We were anchored at Nipah, on the southern end of Tioman. This is the place referred to in a previous entry as the site of the amazing nocturnal racing worms. We pulled in at Nipah to discover the sandy sea floor peppered with large urchins, which each had a population of small black fish living between its spines. The really remarkable thing though, was the speed with which the urchins were chasing each other around. They were in twos and threes and moving at an unbelievable pace with one of the racers emitting a cloud of what I assume to be sperm. Incredible sight! What’s with Nipah and high speed invertebrates?

At around 03:00 in the night, a powerful squall woke us and intensified until Hylton, the skipper decided that the best course of action was to lift the anchor and head back to Tekek, rather than be slapped around at anchor for the rest of the night. What ensued was an exciting night run to Tekek and a very welcome calm in the duck pond at the marina. A very exciting end to a very interesting expedition!

Thanks to all the team members who made this research possible by donating their time, energy and money to this very worthy alternative to sitting on a beach with a book for their holiday. Thanks as well to Katie Yewdall the scientist whose project we helped to crew and Hylton Hines the skipper of the Araliya.

See you again on expedition some day, somewhere.

The team from slot three of the Tioman Island Reef Check expedition have, despite some nervous apprehension, passed their full set of identification examinations with flying colours and are now ready to hit the high seas and begin surveys. We board the Araliya tomorrow for the final leg of this, the inaugural Malaysian expedition. The data these teams have gathered, will join a growing body of such data that the Reef Check organisation collects from coral reef locations around the world. The hard work of the team members from this and similar expeditions will be used by scientists, conservation organisations and policy makers to plot their course into the future as they develop their approaches to the management of these precious but poorly understood ecosystems. The people on this expedition could have had an easy holiday under an umbrella with a good book, but they have instead dedicated their time off work to a cause, which desperately needs their boots on the ground (or in this case fins). My hat off to all of you.

The first full day of Reef Check training for slot three of the Tioman Island expedition is going well. The difference between snappers and bream is not causing serious conniptions. The subject of “deep reefs” came up so I sent a quick email to Tom Bridge of James Cook University, an authority on the matter. Before the end of the classroom session, Tom had sent an elaborate and awesomely interesting reply on the nature and role of these off limit ecosystems. The reading of his email at the end of the class provided a brilliant opportunity to get input from a leader in an unusual field of reef research. It also showed how valuable are scientists who care enough to make such an effort to educate the public. Cheers Dr Bridge!

P.S. A video blog of slot 1 is now also available (see below).

Today marks the last day of the second slot of the Biosphere Expeditions / Reef Check project to Tioman Island in Malaysia. Despite various challenges, including the temporary loss of a team member due to an ear infection and the loss of the compressor for half the slot, we did not miss a single research dive and even got in a couple of leisure dives. The team worked overtime to surmount the difficulties and Ed, with his bad ear, took on the deck divemastering duties and data processing like a pro. Full kudos to this group of excellent expeditioners and thank you for all your help!

The first real day of ocean based Reef Check with the second team begins with a glassed out sea and 20+ meters of visibility. We are heading to Chebe to survey some reef that as yet has escaped the attention of the Reef Check process. The “fish team” timing on the transect is very good which keeps the rest of the procedure in check, making Katie a happy scientist. 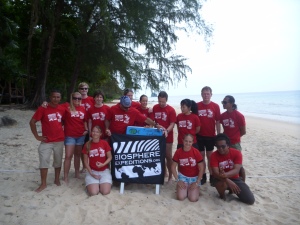