We finished the 72 h waterhole observation on Tuesday noon. Thank you, team 2, for completing this far from easy task by filling all morning, afternoon and night shifts, coping with rain, driving at night and slippery roads, as well as unrecognisable sounds during night time. Rebekah & I were pleased to have the team together again after three days of teams going in and out in pairs every four hours while others went for the morning & afternoon wildlife survey activities. During the review on Tuesday afternoon we shared our experiences. Some of the team enjoyed sitting quietly in the hide thoroughly, some found it was an enjoyable and a very special experience – especially the night shifts are something to remember.  Others were rewarded with rare leopard sightings, which is what everyone had hoped for, but couldn’t be expected. Others got “lost” on the way and were late for changing shifts or sat out a thunderstorm and heavy rain in the car while continuing the survey count every 15 minutes.

On the Environmental Educational Day on Wednesday, the team welcomed and hosted another group of 19 students from Emarti secondary school. After a tour through the boarding school’s facilities everyone went out in cars for a game drive within Enonkishu Conservancy. Soon a radio call reached the teams that two white rhinos had walked from neighbouring Ol Chorro Conservancy into Enonkishu territory, followed by their guarding rangers. For both the students and expeditioners seeing the rhinos was the highlight during the game drive. The afternoon at Mara Training centre included three “stations” run by team members: Chris flying & explaining a drone outside, Carrie & Rebecca explaining camera traps & showing videos/pictures at the classroom and placement Leonard answering questions from a local point of view in the cow shed. Former teacher Ellen did a great job with dividing the students into smaller groups and initiating the group rotations by imitating hyaena calls. We finished up with taking a drone picture of everyone lying in a circle on the grass to memorise this very special day. 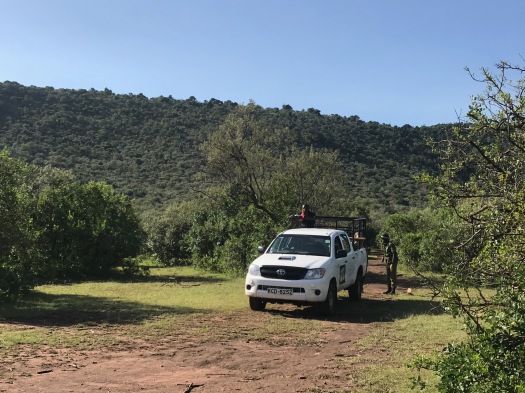 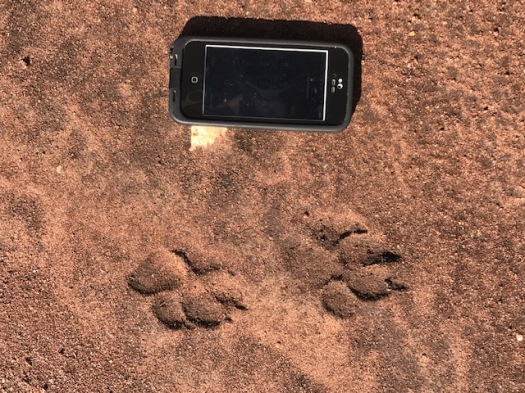 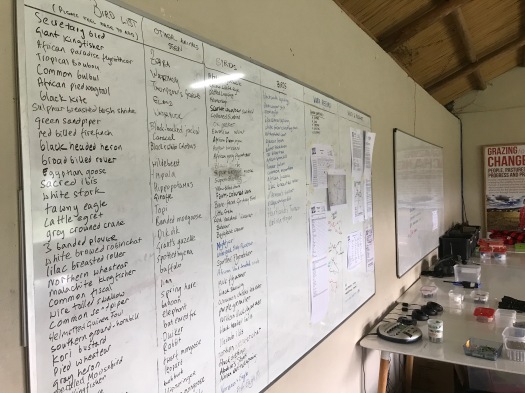