As I signed off on the last diary entry, I could see the first lot of team members cresting the ridge that separates us from their target valley for that day. As I packed up the satellite coms, they were close enough for me to see that there was a spring in their step. Although it was really just a training run with Volodya, they found quite a lot, amongst which was clear footprints of a Palas’ cat or manul. The next day was also productive, with the first real survey yielding access into Issyk Attar’s upper reaches where a fantastic high traffic pass was discovered. Tracks and scats of all kinds and so fresh that the urine patches of many argali were still clearly visible amongst the still wet droppings. There are two platforms below the pass and each has a wide mud flat, which has captured the comings and goings of herds of beasts as they negotiate the pass into the valley systems to the north. This will surely be a big focus of next year’s explorations.

This morning the heat of yesterday’s excitement was significantly cooled off by the fact that we all awoke in igloos. As our tents bowed in under the weight of a good layer of snow, we were woken by the freezing sides of the inner tent settling on our heads. The drumming of tent walls being pounded from within to dislodge the heavy snow blanket woke those not already up, and when we opened the zips and stepped outside, we were in another land from that which had seen us off to bed the previous night.The entire valley was covered in snow. 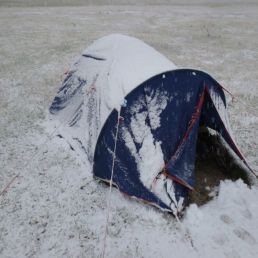 The day’s plans now out of the window, we fixed a couple of tents before the first snowball hit its mark. Thomas and Robert started it, but Katie and then Susanna quickly returned fire, and pretty soon it was on for young and old. When Shiloh emerged from his tent, he was imediately pelted, but, as an ex riot cop, he just stood there and only moved a little when the trajectory of a snowball included him. No-one hit him despite the flurry of projectiles he was simultaneously monitoring.

The newest member of the team, named Matthias by his creator Gary, can be found front and centre of the team photo below. 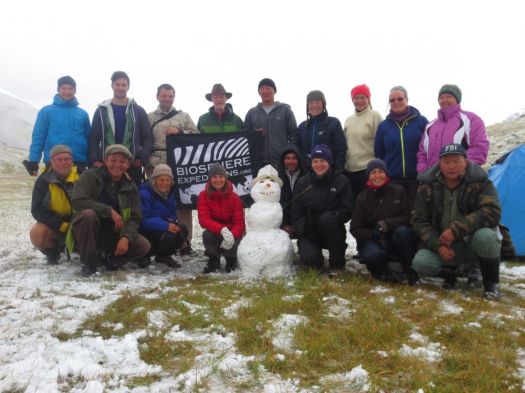 An addendum. It is now a few days since I prepared the above. Some technical issues have prevented me from sending the August 15 diary and we have more news. The cold weather is intensifying and snow is now a feature of our days and nights. The cold has caused havoc with some of our equipment and is making sending diaries difficult. The traditional Sunday off saw most of the team pay a visit to our neighbours down the road who live in a very beautiful yurt and display fantastic traditional Kyrgyz hospitality. On their way back to base camp, our people stopped at another yurt and learned that only three days previously a horse was attacked by what the herders say was a leopard in a valley close to base refered to as No Name Valley. This has led to a revision of our plans for the day and a team has been sent to the herder to find out the precise details. The urgency is warrented by the fact that the horse survived the attack and is sporting the wounds which, if leopard, will be highly characteristic of such and need to be photographed as soon as possible. We have a vet on the team as well, who may be pressed into action if we find the horse’s condition requires her attention. Stay tuned.