Team 2 arrived on Sunday and after the training phase went out on Tuesday to set up eight camera traps. As usual we went through introductions, the equipment and the research background & goals before the whole team did their first forest orientation walk. The projector worked all the way through until the end of Alfredo’s indicator species presentation. Thanks to Tine (1st slot) the printer cartridges arrived at camp together with team 2, so that we were able to produce fancy identification sheets of monkeys, felids & terrestrial mammals for the field work.

Steering a canoe from the front was a new skill to learn for most of team 2. Peter complained that fallen trees, trunks and river banks decided to hit his canoe loaded with two passengers. Sitting in the middle Eva silently held on to her camera bag while Linda sitting in the back was commenting every crash with a shout. Laughs could be heard a long way up and down the river – no capsizing, though. Katherine and Herbert got the hang of it quickly – lucky me, as I was sharing their boat.

Over the last two days the team did survey walks on seven trailgrid transects and went out by canoe in the afternoon to do surveys along the Tahuayo river recording saki monkey, saddleback and mustached tamarin, titi monkey and some more non-mammal species. The Tamshiyacu Tahuayo conservation reserve is a biodiversity hotspot, but that doesen’t mean that indicator species to be monitored are seen easily! Again, Donaldo and Alfredo did a very good job by spotting monkeys yesterday while their teams did the measurements and filled in the datasheets. Full trained up, the girl power group of Eva, Linda & Katherine went ‘alone’ today while Peter and I teamed up with Donaldo.

On our night boat ride on Wednesday we spotted a couple of caiman just in front of our base, as well as various frogs. 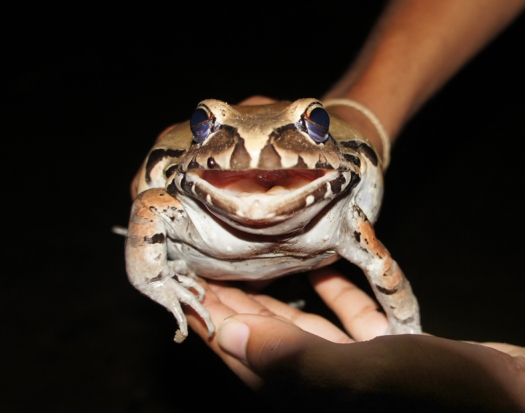 This morning Linda left early to catch a flight. We said goodbye to her after another early breakfast at 5:30, but not before a team picture was taken shortly after sunrise (see websites below). Everyone else is now doing their final transect routes and collecting the camera traps that have been out for four nights. Watch this space for updates on what we have caught on the camera traps…

Update from our conservation holiday volunteering with jaguars, pumas, ocelots, primates and other species in the Peru Amazon jungle